Author Bob Showers promises to be one of the year’s most entertaining guest speakers. Join Rogers Rotary on Wednesday, July 24 when Bob shares first-hand stories, photos, and interview quotes from many MN Twins greats. His presentations have been profiled by KRFO Radio and the North St. Paul Rotary Club.

Bob describes in his book,  The Twins in the Dome:
”The Dome was our signature.”–Torii Hunter
”The Dome was alive and it was loud.”–Corey Koskie

”A lot of spooky stuff happened in there.”–Kent Hrbek

From 1982–2009 the Twins called the Metrodome their home. During that time there were World Championships, Hall of Fame performances, crazy bounces, and balls lost in the roof. It was a different kind of ballgame and the Dome had many critics, but you always knew the game would be played. Along the way, the Twins shared the Dome with some of the top groups in rock music. The Metrodome was ”Minnesota’s rec room.”

Watch our welcome video (below)! 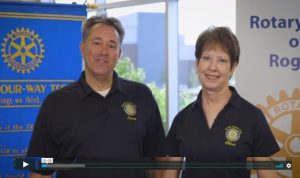